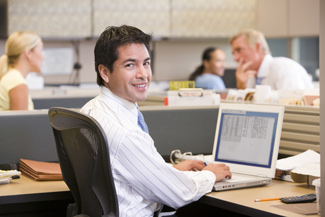 Bringing Lean to the Office

When we hear the word “lean” applied in a business setting, we immediately think manufacturing. After all, it was Toyota that first applied the lean approach to its assembly lines, triggering a seismic shift in production processes felt throughout the entire manufacturing world.

It has taken some time, but businesses — not to mention nonprofit organizations and government agencies, including Delaware’s Department of Natural Resources and Environmental Control — have learned that the concepts and values that have made lean the standard for manufacturing efficiency deliver similar returns within an office environment.

The essence of lean thinking is the elimination of waste — creating processes that need less human effort, less space, less capital and less time to make products and services at a lower cost and with fewer defects than have been done previously.

In a manufacturing environment it is easy to understand — and to monetize — the value of improved efficiencies in production. It might not be as easy to document that value in an office setting, but reducing the expense of processing an invoice or a purchase order from $20 down to $15, for example, can really add up when applied to thousands of transactions over the course of a year.

The same principles that apply to the manufacturing side of your business apply to your office operations. The ultimate goal is to eliminate any work that does not add value. To do so, you must specify the value you’re seeking  (for example, cutting processing time on invoice payments by 25 percent), and then identify the steps in the process, map it out and determine how to make it flow better.

If you’re familiar with lean principles already, you’ll understand the process I’ll describe here. If you’re not, there’s plenty of information readily available. Good places to start are The Lean Institute and the bible of the lean movement, Lean Thinking by James P. Womack and Daniel T. Jones.

The key steps in establishing a lean process are contained in what is known as the “5S” program, which stands for Sort, Straighten, Shine, Standardize and Sustain. Expressing the steps simply, it comes down to this: Sort out the steps in your process. Straighten them out so they move forward logically. Clear out the unnecessary steps so the process shines. Standardize roles so everyone knows what comes next so the steps become second nature. Sustain the process as you move toward continued excellence.

In virtually every office, it is easy to find bottlenecks that have developed over time that can be eliminated by analyzing work flow from a lean perspective.

In Delaware’s Department of Natural Resources and Environmental Control, for example, the permitting process bogged down at the very start because most applications arrived in the office either incomplete or improperly filled out. The solution: create a new application form and a checklist that makes instructions easy to follow.

At HandyTube (see related story), payments to suppliers were slowed down because the person responsible for issuing the checks was not receiving all the documents required to verify the order at the same time. The solution: require the individuals responsible for forwarding the documents to check their incoming mail more than once a day.

In some offices, I’ve seen time wasted because workers who must communicate regularly with each other throughout the day had their desks positioned on opposite ends of the office instead of next to each other.

In most office settings, the Sort-Straighten-Shine steps will trigger multiple changes as they identify and reorganize processes, while eliminating actions that add no value.

If you haven’t taken a look at your office processes lately, the new year is as good a time as any to do so. By thinking lean, you may well be able to achieve efficiencies and economies comparable to the savings that lean has already brought to your production processes.

HandyTube, based in Camden, Del., is a unique manufacturing business, producing seamless stainless steel coil tubing for diverse industries worldwide. Through a unique heating and cooling process, HandyTube is capable of stretching and coiling stainless steel pipe to lengths of 6,000 feet, and with an outside diameter as small as two-hundreths of an inch. Its products are used in the healthcare, aerospace and oil and gas industries.

When HandyTube saw a need to improve production efficiency, it sought assistance from the Delaware Manufacturing Extension Partnership (DEMEP), which provides training in lean manufacturing techniques. More recently, the entire Handy & Harman Co., of which HandyTube is a part, decided it wanted to implement lean processes throughout its entire operation, not just on its production floor, says John Coates, President & CEO.

“Most of the opportunities for savings through lean are on the floor, but when we looked around, we realized there were opportunities everywhere, including in the office,” Coates says.

Handy & Harman has tried several different approaches in its lean analysis – including the typical cross-functional kaizen, where employees from several departments come together to analyze issues within one department, to bringing in specialists in a single area from other installations to study issues at a particular site.

One recent study focused on why payments to vendors weren’t moving efficiently. The analysis determined that the employee responsible for handling accounts payable needed to see three pieces of paperwork — an invoice, a purchase order and proof that the order had been delivered — before issuing a check, but the three documents were showing up on her desk simultaneously only about 20 percent of the time. As a result, the accounts payable specialist had to spend considerable time on the phone or walking to other offices to track down the missing paperwork. Not only were payments being delayed, but overtime costs were increasing, and so was the worker’s stress level.

“We figured it out. One of the invoices went to the person who originated them, but he was only checking his inbox once a day. We tightened that up, and we mapped out the whole process,” Coates says. “In no time, we were up above 90 percent in having the documentation properly assembled, and now, if it ever gets below 90 percent, we’re asking questions about what’s happening.”

It’s important, he says, because “at the other end of the process, somebody is waiting for their check.”

The lean analysis also turned up concerns with HandyTube’s Customer Resource Management (CRM) and information systems, Coates says. Multiple entries, some of them inaccurate, were impacting the process of providing quotes to customers. “It took a lot of time to look over all the rules in the process, and we realized that people didn’t understand all of it,” Coates says.

By sorting out the problems and streamlining the process, HandyTube was able to give its customers a faster turnaround on quotes, and it was able to avoid a possible increase in staffing in its customer service section.

“I can’t say we’ve gotten additional sales as a result, but the work is being done more efficiently,” Coates says.

The experience has made Coates a firm believer in implementing lean processes in an office environment.

“All across the company, you’re trying to advance a culture of waste elimination,” he says.